Privacy-focused cryptocurrency verge (XVG) has been in the news for all the wrong reasons in the last 24 hours, but the technical charts indicate better times may lie ahead.

Notably, the verge chain was attacked yesterday, with the hacker reportedly making off with $1 million-worth of tokens. The issue was first brought to notice by a user named “ocminer” on the Bitcoin Talk forum.

The verge team acknowledged the attack via Twitter in the afternoon Wednesday, while its primary developer, “DogeDarkDev,” tried to calm market nerves by stating that the team has pushed out a “quick fix” and the team is working on “a whole new block verification process”.

However, the quick fix turned out to be a hard fork, as pointed out by ocminer. That didn’t go down well with the investor community, which called for a rollback to cancel the coins mined during the hack. The developers rejected that idea, however, and attempted to downplay the whole episode by calling it a “small attack.” The team is scheduled to release the full fork update today.

It is worth noting that prices had jumped to a six-week high of $0.078 on April 3, possibly due to successful crowdfunding campaign and speculation that verge is partnering with a major retailer.

Despite the pullback to $0.048, the short-term outlook remains bullish, as per the technical studies.

XVG cleared the descending trendline hurdle in a convincing manner on April 1 and closed well above $0.056 (March 27 high) on April 3, signaling a short-term bullish trend reversal.

The cryptocurrency has established higher lows, as represented by the ascending trendline and higher highs, as indicated by a move above $0.056 on Tuesday. So, XVG looks set to scale the 100-day moving average (MA) resistance lined up at $0.0789.

Additionally, the chart shows a “death cross” – a bearish crossover between the 50-day MA and the 200-day MA. However, the indicator tends to be a lagging indicator and shouldn’t be a cause of concern as long as prices hold above the ascending trendline.

On the downside, a drop below the ascending trendline would abort the bullish view, while a break below $0.032 (March 30 low) would put the bears back in the driving seat.

Verge is…on the verge. Of something. Nobody knows. But whatever it is, it has the cryptocurrency gamblers throwing money at what has now become a billion-dollar entity. The Verge (XVG) coin rose 66% on Tuesday, the biggest mover of the top 50 traded cryptocurrencies.

It all started with a message by one of its developers, nicknamed Sunerok, posted on YouTube. Wearing a black baseball hat and a hoodie and speaking from what looks like someone’s living room, Sunerok jokingly thanked investors for the millions of dollars, adding “I packed my bags and am moving to my own little island with the funds you all donated.” After the one liner, the Verge developer talked about a “partner.” No one knows who this partner is. Some say it’s Amazon (it’s probably not). Others say GoDaddy. Verge is being quiet on it, but the coin has been moving higher on the news.

“We are going to announce the name of the partner on April 16 along with a global marketing campaign of the likes you have never seen before,” he says. “It’s going to change crypto in a really good way.”

That date has now been pushed out to April 17. (Surprise!)

Verge is billed as the cryptocurrency for people who love privacy, though one would assume that is mostly the point of cryptocurrency. Verge describes itself as an improvement upon the original Bitcoin blockchain systems.  The Verge coin, known by its ticker XVG, launched back in 2014 under the name DogeCoinDark.

It was rebranded in 2016. Verge is an open-source software company with no real ownership. Development and marketing comes from the crypto community, many of which are just looking for a five-cent cryptocurrency to hit a dollar. A year ago, XVG was worth less than a grain of sand.

According to players in this market, the partnership that Verge is slated to announce later this month is all “hype.” But there are some variables to consider, including the partner being a relatively known global company with high-traffic websites in its portfolio. No one doubts Verge has a partner. But for how long and how much cachet they can bring to XVG is a mystery. 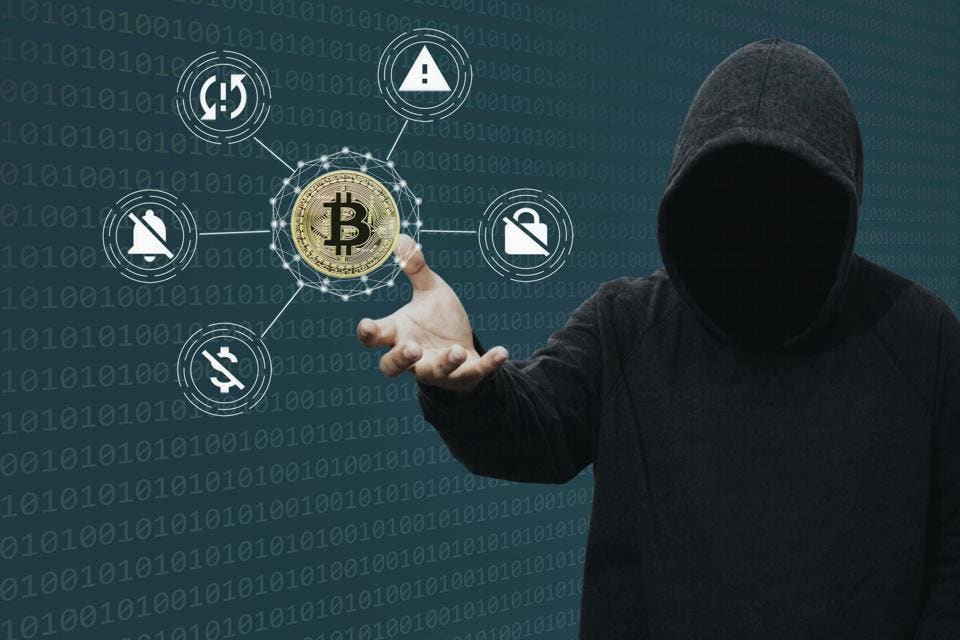 Many crypto companies claim to be the next lords of privacy. Can they survive hackers? Breaches of exchanges and other blockchain platforms tend to be huge negatives for coins, even those riding high on hype.

Anton Zapolskyi, CEO of crypto exchange Tradelize, says Verge raised less money than companies like Filecoin, which doesn’t have a working product yet. Verge does. “I think they provide pretty remarkable technological solutions through the wraith protocol,” he says. The wraith protocol allows for users to switch between a public, open blockchain, and a private, closed blockchain. If the wraith protocol is turned on, for instance, the transaction data is hidden on the blockchain.

Maybe this is the Swiss bank of blockchains?

Or it’s the fear of missing out that has driven this coin so high so fast over the last few days. But since yesterday’s meteoric rise, Verge is back to tracking every other major digital currency and is in the gutter on Wednesday.

Much of the success of Verge hangs on this April announcement. The rest hangs on their coders’ ability to protect from hackers. Private blockchains and private cryptocurrencies may not be the ultimate draw.

“It’s easy to announce privacy solutions, but it’s quite another to survive attacks and deliver on the promises of privacy,” says Nolan Bauerle, head of research at CoinDesk. Verge fell today on news that it was breached by hackers.

Verge (XVG) has great technology, and we’re actually a huge fan of it’s potential. But the Verge team keeps shooting itself in the foot. Missed deadlines, hacks, poor marketing, even worse communication.  The technology can go far, but they desperately need to use some of that “investor money” to hire a competent team and start establishing a track record of being consistent in their announcements or to stop making them.

It is a technology that could go very far with some restructuring of the company. A brilliant developer with poor communication skills, a self proclaimed “whale” in pajama pants (XVG Whale), and multiple “official Verge” marketing accounts confuse the piss out of people. The fleet of XVG Zoo animals is actually pretty cool.

Investors need to sit Sunerok down and say “you develop” we’ll to help you hire a marketing team, a consistent channel of communication that’s not coming from a set of pajamas at McAfee’s house, and lastly when you set deadlines.. meet them. Until that happens, as promising as the technology is and how easily it could be implemented the sad truth is that the company is run in an embarrassingly awful way.

We hate to say that, because the technology is so great. But hopefully they can pull their shit together.

We are the best in the business! Learn more here

The information provided on this website does not constitute investment advice, financial advice, trading advice or any other sort of advice and you should not treat any of the website’s content as such. CryptoClarified does not recommend that any cryptocurrency, game or token should be bought, sold or held by you and nothing on this website should be taken as an offer to buy, sell or hold a cryptocurrency, token, game or anything similar. Do conduct your own due diligence and consult your financial advisory before making any investment decision.

CryptoCurrency Clarified will strive to ensure accuracy of information listed on this website although it will not hold any responsibility for any missing or wrong information. You understand that you are using any and all information available here AT YOUR OWN RISK.

The price of Bitcoin and other cryptocurrencies are highly volatile. It is common for prices to increase or decrease by over 20–100% in some coins in a single day. Although this could mean the potential for huge profits, this also means the potential for huge losses. The same goes for CryptoCollectible games which can be wildly speculative. DO NOT INVEST ALL YOUR MONEY IN CRYPTOCURRENCIES. Only invest money which you are willing to lose.

Cryptocurrency trading may not be suitable for all users of this website. Anyone looking to invest in cryptocurrencies should consult a fully qualified independent professional financial advisor.